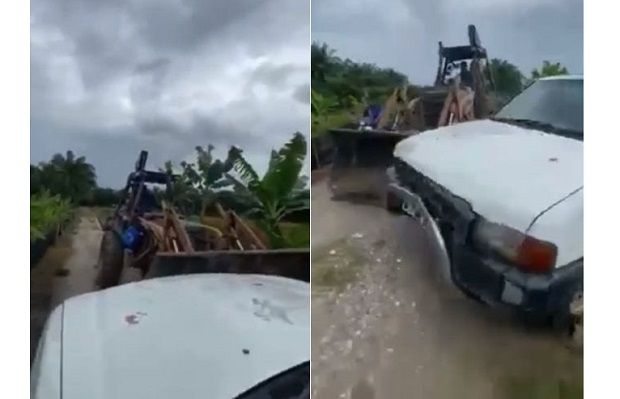 IPOH: The Hilir Perak police have arrested three men following the emergence of a video that showed a bulldozer ramming and pushing away a four-wheel-drive vehicle in Labu Kubong.

ACP Ahmad Adnan said the three included a 28-year-old bulldozer operator from Chenderong Balai, an estate owner, 47, and a lorry driver, 28, both from Labu Kubong.

He said an argument had broken out between the farm owner and the bulldozer operator over a trench that was dug up in the middle of a road near the former’s premises in Labu Kubong on Wednesday at about 3pm.

“The farm owner had dug up the road to make an irrigation channel to allow water to flow out from his premises as it was frequently inundated,” he said in a statement.

The road is also commonly used by all those who work in the surrounding areas, mainly estates and farms, he added.

“The trench has caused an inconvenience to the other workers and forced them to use an alternative road that was farther,” he said, adding that the farm owner had also explained that he intended to cover up the trench with a culvert.

“The farm owner also said that he had the right to dig up the road as it was located in his father’s land,” he added.

ACP Ahmad Adnan said the bulldozer operator had called the farm owner rude and scolded him with expletives.

“As the bulldozer operator tried to leave the area, he rammed his vehicle into the farm owner’s four-wheel-drive.

“The bulldozer operator stopped his vehicle, got out and chased after the farm owner’s father with a hammer,” he said, adding that the 4WD was heavily damaged.

“The farm owner was also slapped on his neck by another person during the fracas,” he added.

ACP Ahmad Adnan said the police would investigate the incident for voluntarily causing hurt, criminal intimidation and causing damages to a property.

“We will be obtaining a remand order today (Oct 10) at the Teluk Intan Magistrate’s Court to facilitate further investigations,” he said.