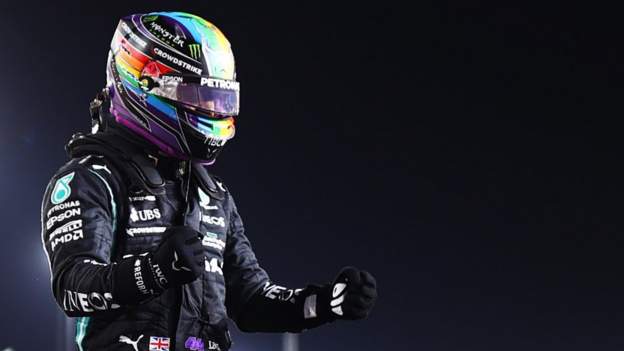 Lewis Hamilton set a blistering pace to take pole position for the Qatar Grand Prix by nearly half a second.

Red Bull’s Max Verstappen, 14 points ahead of Hamilton in the title race, was 0.455 seconds behind in second.

Verstappen’s team-mate Sergio Perez was only 11th, putting Red Bull at a strategic disadvantage for the race.

With Bottas up with Hamilton at the front, Mercedes can try to pincer Verstappen on race strategy in a race, by forcing him to stop at a time that is not optimal. It is hard to cover two cars on strategy when a team only has one.

Hamilton was quickest on both runs in the final top 10 shootout, just under 0.2secs ahead on the first run despite running wide in Turn One and making a mistake in Turn Two.

His final lap, though, was a beauty and Verstappen and Bottas had no answer.

Hamilton said: “Yesterday was a really difficult day for me. Thursday and Friday, I wasn’t feeling too well – I had a bit of stomach ache.

“I was off [the pace] yesterday so really had to dig deep. I was here ’til midnight working late.

“We found a lot of areas I could improve, made some changes for final practice and it seemed to work.

“You have to try and carry that through into qualifying. We didn’t have any traffic and that last lap was beautiful. This track is amazing to drive – all medium and fast corners.”

Verstappen said: “Just lacking a bit of pace. It has been just a bit more tricky for us again in qualifying. Checo [Perez] is not even in Q3, so you can see we are struggling a bit more than normal. [I’m] second, so it is all to play for, still.”

The championship remains finely poised, with victories of critical importance for both contenders.

If Verstappen wins, he would extend his points lead out to close to a clear win with only two races remaining, a deficit Hamilton would find tough to close.

But if Hamilton wins for the second week in a row after his magnificent drive in Brazil last weekend – in which he started the sprint race on Saturday from the back and overtook a total of 25 cars over one and a third grand prix distances to win – then the gap would be something between six to eight points, assuming Verstappen finishes second.

The existing deficit means Hamilton cannot afford a clash on track with Verstappen.

Overtaking is expected to be difficult around a track that is populated mainly by fast corners, so the battle for the lead down to Turn One and then pit-stop strategy will be critical.

Hamilton said: “Being such a fast circuit, I don’t think it will be the easiest of circuits to follow at but it’s also not massively degrading the tyres.”

Bottas, who said he had lost the balance of the car after looking so fast in Friday practice, said he was confident Mercedes could work the strategy to their advantage with two cars against one.

‘Omicron’ Not More Severe Than Delta Variant Of Covid: Top US Scientist