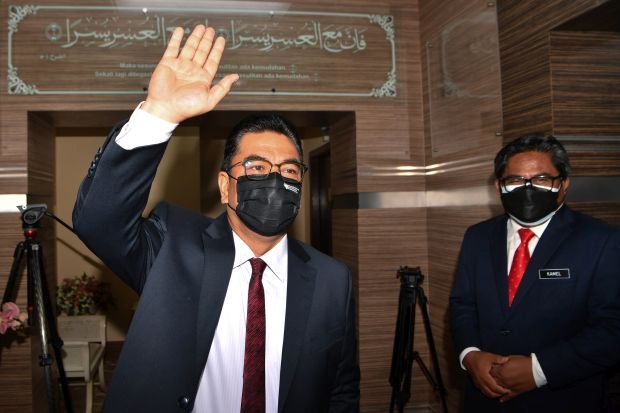 MELAKA: Restoring the trust bestowed by the people’s mandate will be among Datuk Seri Sulaiman Md Ali’s principal goals after returning to duty as Chief Minister.

“It is not going to be easy when given (this) trust, as the burden and responsibilities that await my team will be much heavier.

“It is a monumental test to fulfil the people’s needs… (in accordance with) Barisan Nasional’s manifesto and I will see this through immediately,” he told reporters after clocking in for duty as Melaka’s 13th Chief Minister at Seri Negeri on Monday (Nov 22) morning.

He said in the BN manifesto, there were matters to be implemented within 100 days, a year, and two years, as pledged.

“For a start this will be my main focus. Promises must be kept,” he said.

He also expressed gratitude to his team of supportive officers whose cooperation was important for the prosperity of the Melaka people.

“After this, I will meet the state government senior officers, especially the ex officio members available.

“We will look into the plans to be implemented… and the tasks not done during the chief minister’s absence throughout the state election period,” he said.

Sulaiman was earlier sworn in as the 13th Melaka Chief Minister when BN formed the state government after winning the Melaka state election on Saturday (Nov 20).

He received his letter of appointment and took the oaths of office, loyalty and secrecy before Melaka Yang Di-Pertua Negeri Tun Mohd Ali Mohd Rustam at Dewan Seri Utama of the Governor’s Office at about 1am on Sunday (Nov 21). – Bernama